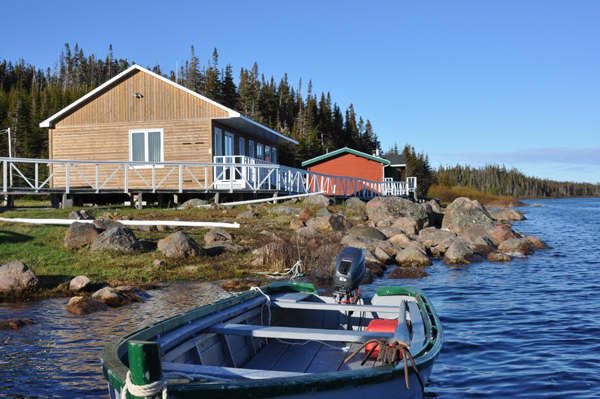 The outfitter belongs to the millennial Innu community of Unamen Shipu (La Romaine).

Owners of exclusive fishing rights in the Étamamiou River basin (5 km upstream from the mouth of the Étamamiou River in the Gulf of St. Lawrence), we offer an exceptional experience in a country of excess. All this, with a quality of accommodation and remarkable cuisine. You will be moved by cultural contact with the Innu community of Unamen Shipu.

The traditional territory of the Unamen Shipu Innu is located north of the Gulf of St. Lawrence between latitude 50 and 53 degrees north and longitude 59 and 62 degrees west. Most of the land use is made by the many rivers and lakes that are ubiquitous. The main access route is the Kuekuatsheunakapiu River (Coucoutchou). There is Uanamen Shipu (Olamane) near the community, Uashikuteu Shipu (Washicoutai) and Mashkuanu Shipu (Musquaro) which means “bear’s tail” because it is a short river.

The climate is maritime along the coast with cool, wet, windy and foggy summers. The winters are snowy and vigorous on the coast, but even colder in the forest and less windy.

The territory is part of the Canadian Shield with predominantly granite and granitic gneiss with sand and peat deposits in the lowlands. Fir and black spruce are kings in this forest.